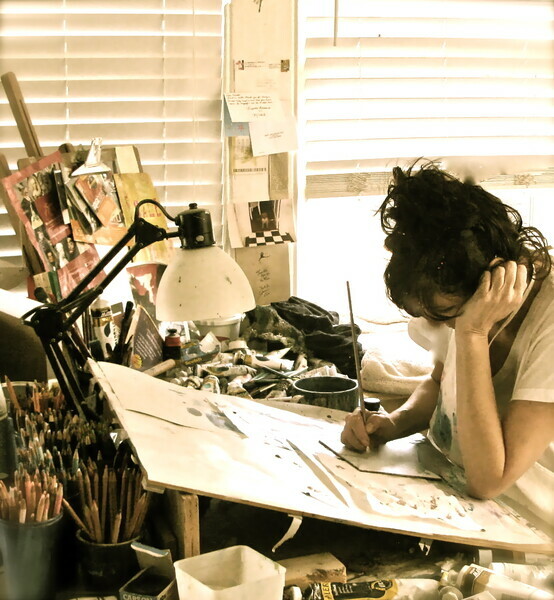 There was a necessity to escape reality at a very young age and so I did, by creating my own world with ink and paint. I prefer it there.

My art is mostly unstructured, unplanned, unrefined and untrained.  It has always been and remains purely an expression of a feeling, a mood, a memory in some shape or form that i once saw or felt. Color inspires me. And travel, and change. I paint places and things I vaguely recall but can't recall ever seeing.

I am always surprised by comments about my style and how varied it is.  It's not as varied as it first appears...it's about as varied as my moods as what I paint is definitely affected by my mood and state of mind. It's much easier to see my unique style in my drawings. I've always drawn more than painted maybe that's why.

I find it MORE unusual to paint the same exact way every time.  If you look at the body of work of some artists e.g. Picasso, Dali and others you would find that they did many different styles of art in their lifetimes but became famous for one style which sometimes leads people to believe that's the only way they painted.  I don't think any true artist is capable of doing only one style without become stifled and bored at some point.

A bit of personal background:

I was born and raised in New York City then moved to L.A. to work in the film industry. I moved to Nashville after the big quake of 94' destroyed my place in Los Angeles.

A partial list of professional work; straight out of college I went to work for the American Academy of Dramatic Arts, then four years at the original Roundabout Theatre Company (amazing time) and when I finally couldn't take it anymore (no #MeToo movement back then) I went to the Hesseltine Baker Talent agency where I met Christopher (Superman) Reeve (such a good story) who I worked with for four years before moving to Hollywood.

I was a research assistant for the author ("Edie" and "West of Eden") and amazing person Jean Stein, worked at Aaron Spelling Productions, as a production assistant to the actress, heiress, socialite Dina Merrill, assistant (or something) to actor David Keith, freelanced as a script analyst for a few film companies (I was awful at it), as an extras wrangler and did bit parts in a few films.  That's a few of the ways I've earned a check in my time.

I've road tripped across the country twice in my life and was a witness in the O.J. Simpson trial. I've known, loved and learned from the great, the interesting, the brilliant and the talented as well as the good, the bad and the ugly, and by losses and gains.

I know that life's losses can also be great gains and the best teachers. I believe in little miracles and things that can't be explained by practical and scientific minds. I've had cancer and at the moment I don't.

Fragments of life gone by are embedded in my soul and spirit and so in my art.

I've lived in such a way as to make a lot of my dreams come true against the odds.

I asked what my own measure of success was and with that answer life began to fall into place.

Thank you for stopping by....xoxn

P.S. To those asking if I am the Natalie Singer who did the predictions in the year end issue of http://ew.com/  yes, that's me.